Blake Shelton Says Rihanna’s “Crazy” About Him, Thinks They’re Going To Hook Up! 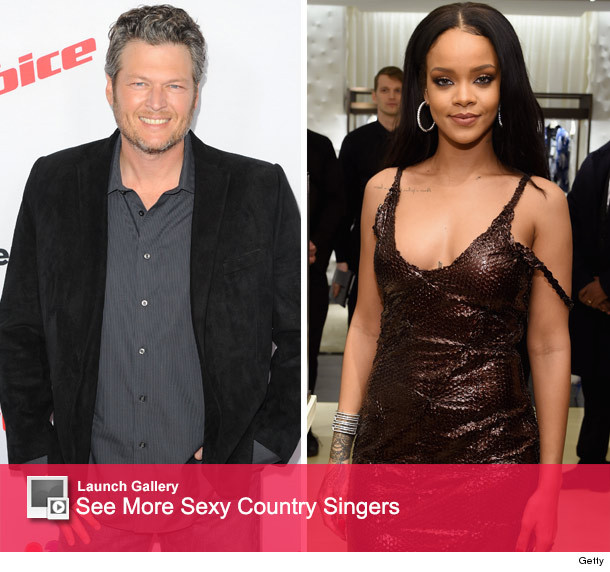 Blake Shelton is wasting no time!

The country star got extremely candid about his feelings for “The Voice” guest judge Rihanna while promoting Season 9 of the show with Access Hollywood on Tuesday.

“I was amazed by Rihanna. She is so funny… and she’s crazy about me,” Blake joked during the interview. “We’ll probably end up hooking up at some point,” he said with a smile. “I’m just saying.”

While Blake was probably just having a little fun, he did take the joke even one step further.

When asked if he’d like to team up with the pop star for a track, Shelton said he has other ideas in mind. “I see a collaboration – maybe not musically. You know what I’m saying?” the “Sangria” singer hilariously confessed.

We love that the country superstar has a sense of humor about his newly-single status … especially considering that he and ex-wife, Miranda Lambert announced their divorce just two months ago.

Shelton’s not the only “Voice” coach who’s on the rebound — Gwen Stefani likewise split from longtime hubby Gavin Rossdale in August.

“I think the coaches spend more time with each other than we do our kids sometimes. Because we do so much stuff like this. Everyday there’s something. I mean, we’ve become family,” Blake explained during the interview.

We’re definitely excited to see how the “My Eyes” singer interacts with RiRi when Season 9 of “The Voice” kicks off September 21 on NBC!

What do you think about Blake’s candid comments? Sound off below and check out the gallery above to see more sexy country singers!