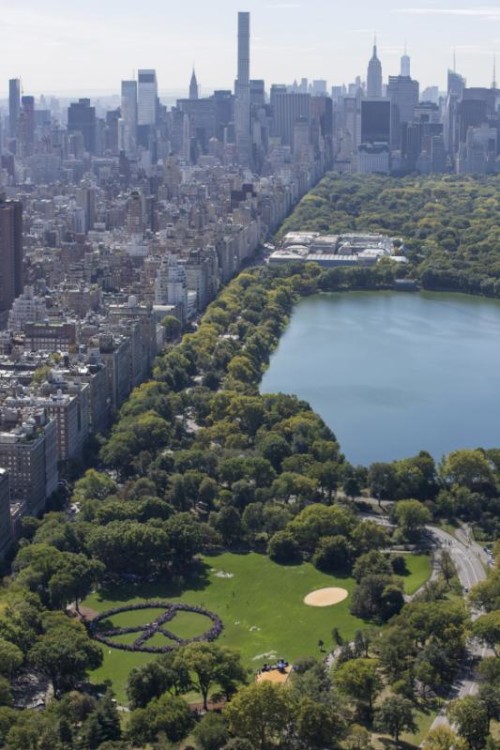 People create a human peace sign during an event to celebrate what would have been the 75th birthday of former Beatle musician John Lennon, organised by his widow Yoko Ono and the John Lennon Educational Tour Bus, in Central Park, New York, October 6, 2015, as seen in this aerial photo provided by NYonAir/Paul GaNun. REUTERS/NYonAir/Paul GaNun/Handout via Reuters   ATTENTION EDITORS – THIS PICTURE WAS PROVIDED BY A THIRD PARTY. REUTERS IS UNABLE TO INDEPENDENTLY VERIFY THE AUTHENTICITY, CONTENT, LOCATION OR DATE OF THIS IMAGE. NO SALES. FOR EDITORIAL USE ONLY. NOT FOR SALE FOR MARKETING OR ADVERTISING CAMPAIGNS. THIS PICTURE IS DISTRIBUTED EXACTLY AS RECEIVED BY REUTERS, AS A SERVICE TO CLIENTS.

The record attempt to honor Ono’s husband, John Lennon, didn’t succeed. Still, the crowd celebrated the upcoming birthday of the late Beatle, who would have turned 75 on Friday.

That did not quell the spirit of the warm, sunny day that brought together everyone from aging hippies to schoolchildren not yet born when Lennon died.

He was fatally shot in 1980 at his apartment building on Manhattan’s west side just across from Central Park.

She concluded: “This is the best present to John.”

In 2009, 5,814 people formed a peace sign in Ithaca, New York. But it was not clear whether participants stood in place in the shape of the symbol for at least five minutes, as required, and therefore no official record was set, Robertson said.

Ayeisha Bradley and her 9-year-old son, Salahedin Callier, were not there to compete.

The Manhattan mother and her son, both Muslims, kneeled quietly under a tree, praying.

“To me, peace is something that should stop fighting, you need peace like, as in, if somebody is fighting with you and they act like they’re not your friend — act like you’re their friend,” the boy said. “That’s making peace. If there’s not a solution, then you’re part of the problem.”

His mother added, “Before we make peace outside ourselves, we have to make peace within ourselves.”